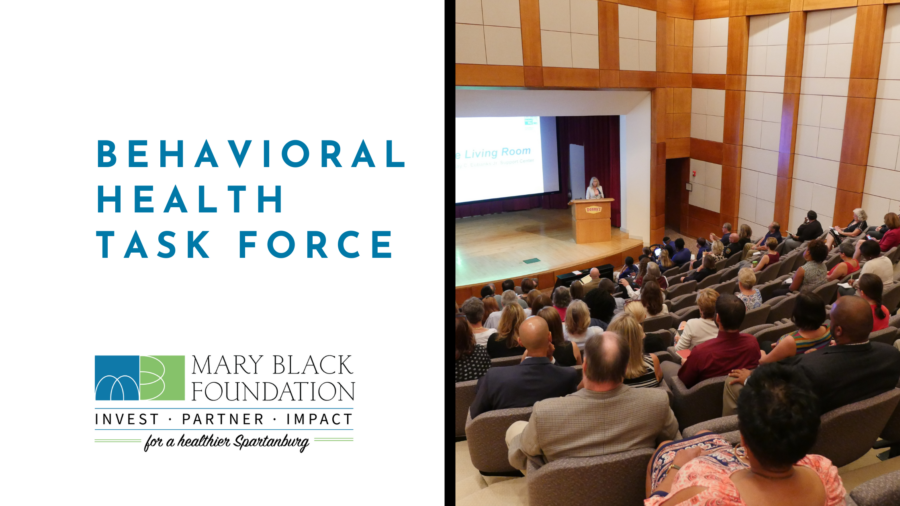 Reflections on the Behavioral Health Task Force and its Many Heroes

Spartanburg has gained well-deserved recognition as a community that proactively addresses mental health – what we have come to call the other half of the healthcare spectrum. Physical health and mental (behavioral) health have much in common. They are linked, benefit from preventive strategies, and have diagnosable symptoms and diagnostic tools.

When the BHTF started during a mental health needs assessment study, there were approximately 25 members representing agencies, organizations, healthcare providers and concerned citizens. Today, there are 134, mostly professionals, who attend the hybrid meetings either in person or via Zoom. Membership, expanded into western North Carolina, also includes folks who tune in from New York, Washington, Atlanta, and California.  Specific programs percolate from needs identified by members and are developed by ad hoc committees whose “mission” is to design an issue-based strategy that is financially sustainable.

The BHTF has had — and still has — many heroes. There was Ray Eubanks with his passion for a detox center and for whom the Peer Support Living Room is named. Renee Romberger who constructively defined the role a hospital can play in a community wide initiative. Neal Urch who saw the critical role the Detention Center should play in reducing behavioral and mental health issues in a highly vulnerable population. Mental Health America in Greenville with whom we partnered in developing a Spartanburg Reassurance Line and now the 9-8-8 suicide prevention line.

The Forrester Center for Behavioral Health remains a critical component of this community’s ability to address behavioral and mental needs with a special focus on substance abuse disorders. Formerly known as the Spartanburg Alcohol and Drug Abuse Commission, the Forrester Center was renamed in 2016 in memory of David Forrester an original member of the BHTF and a champion of behavioral health for over 40 years.

Early on, the BHTF underwrote the first year of the Compassionate School process and Adverse Childhood Experiences training, now implemented and operated by all seven of the Spartanburg school districts.  Today through that initiative and with the expansion of ACEs training throughout the county, Spartanburg is becoming recognized as a trauma-informed community.

Mental health leadership has continued to change. Emerge (previously Westgate Family Therapy) is a critical player in expanding behavioral health resources by providing training, licensing, and experience for graduate counselors (nearly 95% of whom remain in the upstate region).  Picking up the mantel from Jim Rentz, who founded Westgate, and Elizabeth Martin, PJ McEnroe was instrumental in expanding the role they play. As PJ moves on, we are happy to report he will retain a community presence and remain a member of the task force and will be replaced as executive director of Emerge by Heather Witt who has served as co-chair of this BHTF since its inception.

Roger Williams, head of the Spartanburg Area Department of Mental Health for the past five years, is retiring but has made an indelible and extraordinary impression on the future of healthcare in this region. Under his leadership, DMH has expanded outreach, implemented telehealth options, developed peer support living rooms, secured previously untapped funding sources, created crisis intervention partnerships with law enforcement, advanced the case for the 988 system, and championed adolescent focused initiatives. He, too, will remain engaged with the task force.

What all these people listed, and a very long list of unlisted individuals and groups, have in common is a passion for this community, for the mental and behavioral health of its residents and a belief in the efficacy of working together. They have built a model that develops upstream strategies to reduce the downstream demand for services. They have made a difference and we are grateful.