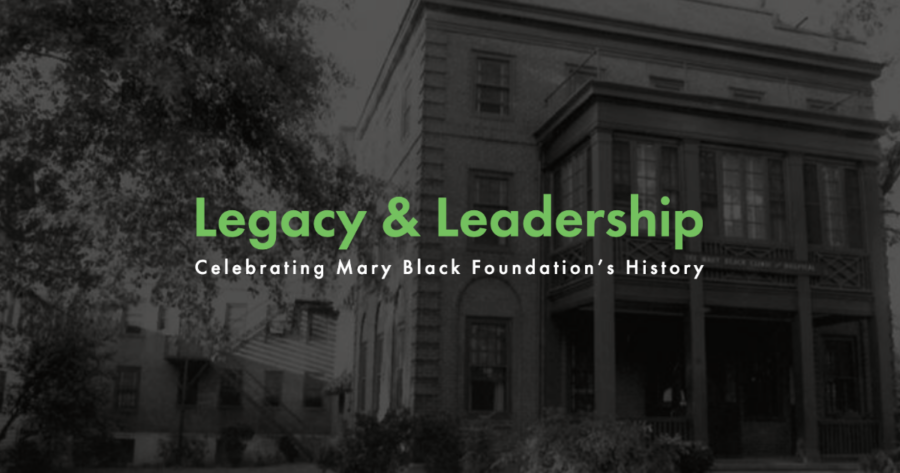 2021 marked the 35th anniversary of the Foundation’s inception and 25 years since its reconfiguration as a private foundation. However, the Mary Black Foundation has a legacy that extends beyond the last 25 years. In fact, the Foundation was originally formed in 1986 – to support the Mary Black Memorial Hospital and related community programs.

For our first 10 years, we raised funds throughout the community to support hospital and community initiatives.

When the hospital was sold to Quorum Health Group, Inc., community leaders advocated for the creation of a private foundation that could benefit the community for years to come. Those leaders had a vision for how the hospital’s resources could be reimagined for a healthier Spartanburg.

The Mary Black Foundation is an independent, private foundation with a rich history that includes the legacy of the Black family, a drive for health improvement, and strong leadership with the capacity to translate vision into reality.

Mary Snoddy Black and her husband, Dr. Hugh Ratchford Black, moved to Spartanburg in 1894. Dr. Black and two other physicians sought to develop hospital facilities as a way to improve healthcare that had been previously provided in private homes. Mary provided them with $3,548 to purchase a frame house on North Dean Street, which they used to establish The Spartanburg Hospital.

In 1907, enough funds were raised to build a new hospital next door to the frame house. The Spartanburg Hospital continued to operate until 1921 when the Spartanburg General Hospital opened. Today, the brick building on North Dean Street is still delivering high-quality healthcare as the home of St. Luke’s Free Medical Clinic.

In January 1925, Dr. Black participated in the establishment of another new hospital, the third of his career. He and his two sons, Drs. Sam Orr Black and Hugh S. Black, opened the Mary Black Memorial Hospital in honor of Mary Snoddy Black. Her name was chosen again in 1986 when the Mary Black Foundation was founded.

Since 1986, the Mary Black Foundation has been instrumental in advancing efforts to improve the health of Spartanburg County. The Foundation’s efforts have been led by a board of trustees populated with community members, including several direct descendants of Mary Snoddy Black: Dr. Sam O. Black Jr. (1920-2002), Marianna Habisreutinger, Wally Barre, and Anna Converse.

Reflections from Past Leaders

In addition to its strong volunteer leadership, the Foundation has been successful over the years due to a skilled and professional staff. When the Foundation was first formed, as the supporting organization of the Mary Black Memorial Hospital, Robert V. Pinson served as the chief executive officer.

Soon after, Janice B. Yost, Ed.D. was hired, and it was under her leadership that the Foundation transitioned to private-foundation status after the sale of the hospital.

During this anniversary year, we asked each of the former CEOs to reflect on their time at the helm of the Mary Black Foundation.

In the years since becoming a private grant-making organization, we have been fortunate to have the right leadership at the right time, including:

As President & CEO of the Mary Black Foundation at that time, it was my great privilege to guide the Trustees’ process in creating the Foundation’s grantmaking agenda and its early implementation. The impact the grants have had on the lives of many residents over the past 25 years speaks volumes to the value this philanthropic resource has already brought and holds much promise for future generations.”

“One of the great benefits afforded by the legal and financial structure of private foundations is the ability of the foundation’s board to assume various kinds of risks, and my years at the Mary Black Foundation were molded by the Trustees’ increasing willingness to do that. It was remarkable that the Trustees could look at an empty, drab building on what was then the edge of downtown and envision a building that would provide adequate office space, rental space, meeting rooms for nonprofit organizations, and an outdoor plaza.

Even more exciting for me was the Trustees’ willingness to explore and implement mission-related investments. The Trustees had agreed to partner with the City of Spartanburg on a project to renovate the C.C. Woodson Community Center utilizing a $1 million, low-interest loan from the Foundation. Later, the Foundation was one of the early investors in the Northside Initiative. I try to stay abreast of what’s happening in Spartanburg, and I am delighted that the Trustees continue to understand its investment portfolio as more than a way to generate returns that can be directed toward grantmaking, but also as a means of making community change through local investment. Although more foundations are engaging in mission-related investing and local real estate transformations, that kind of vision is still not common. The Mary Black Foundation has a well-deserved reputation as a risk-taker in those regards, and I consider my role in that work as a highlight of my career.”

“During my tenure at the Mary Black Foundation, I realized the significance of this organization in our community.  There was no other single philanthropic organization in Spartanburg that could provide the annual giving that we could. This was a wonderful benefit and a huge responsibility.  It became important for our staff to be out in the community working with our grantees and understanding how we can make the most impact in early childhood education and healthy eating/active living.

I’m also so proud that our Foundation took the lead on the Way to Wellville initiative. We learned so much and have seen the hard work pay off with learning how to work with our partners and creating powerful and impactful initiatives such as Hello Family. I am so happy that I was able to be a part of this Foundation for five years!”

Previous PostIn Their Own Words: Funders Share Stories of ...
Next PostAdvancing Health Equity in Spartanburg: Safe ...