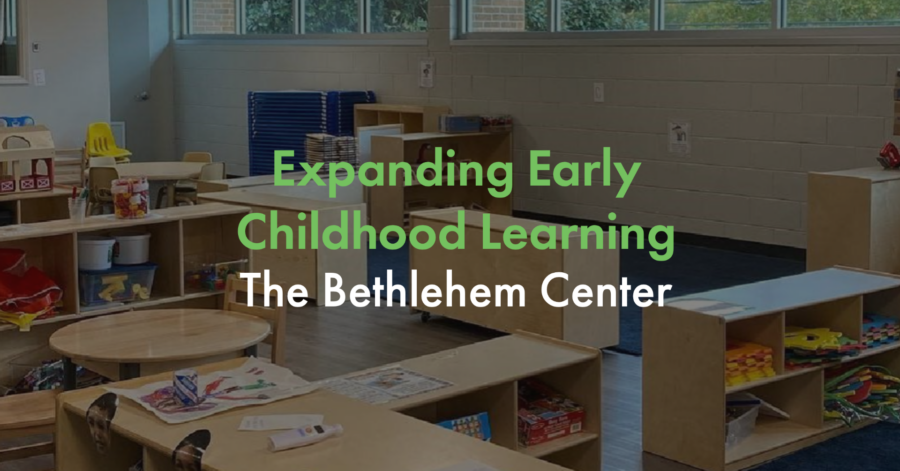 Reimagining What is Possible

The Bethlehem Center is helping the Highland community reimagine what is possible. The Center is located in an often-overlooked area of Spartanburg, but community advocates have been successful in working with the City of Spartanburg to develop a transformation plan for the neighborhood. Due to the trust built in the community, the Bethlehem Center was a central factor in making sure the community’s voice was heard and valued throughout the planning process.

Established in 1930, the Bethlehem Center set out to address a critical need for childcare and afterschool programming. Since that time, the Bethlehem Center has expanded and strengthened its services to meet the needs of residents more holistically across the lifespan. A longtime volunteer and current board chair, Sue Owens, says the Bethlehem Center was practicing what is now called a ‘two generational approach,’ before it became the standard for improving family and neighborhood outcomes.

The two-generational approach of the Bethlehem Center was one of the factors that attracted the Mary Black Foundation. In 2020, The Foundation and the Bethlehem Center began exploring a partnership with Spartanburg County First Steps and the City of Spartanburg to open a high-quality early learning center in a vacant building across the street from the Center. Patrena Mims, executive director of the Center, described the Mary Black Foundation’s investment as meaningful beyond the grant dollars. It seemed as if the broader community was finally recognizing the value of the Bethlehem Center and was saying, “We are behind you, and we believe you can do this.” The Foundation invested in the programming for a new child development center, and also invested in the capacity of the Bethlehem Center and its leadership. The funding allowed the leadership the time to look beyond day-to-day operations and to dream big!

In August 2021, excited and eager young children walked with their families to the first day of classes at the new Highland Early Learning Center. Bethlehem Center board members and volunteers, community leaders, and staff were there to open the doors to a new future. The Highland Early Learning Center is a beautiful, inspiring space for children and their families. For neighborhood residents, there is a sense of ownership and pride in this place that can transform a child’s life, a family, and a neighborhood.

For Patrena, the Highland Early Learning Center is a tangible outcome of what can happen when communities are given the autonomy to make decisions that address their fundamental needs. The staff, board members, and volunteers at the Bethlehem Center know the residents and are in continual conversation with them about the needs of the neighborhood. The Bethlehem Center sees itself as the eyes and ears of the community, and sometimes its voice, because it shares a history of mutual trust. Dr. Russell Booker, executive director of the Spartanburg Academic Movement, agrees that the process that led to the new early learning center speaks to the thoughtful approach of the Highland community. He sees the Bethlehem Center as the neighborhood convener. Sue Owens describes it as a beacon for the residents who have lived their entire lives and raised their families in Highland. There is no doubt that the Bethlehem Center is a community changemaker, well positioned to support the Highland residents’ desire to grow and thrive.